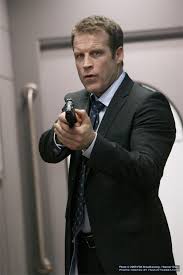 What can I say about this guy but “Hummina-hummina!”

Mark Valley is a graduate of West Point and served as an Army officer during Desert Storm.  SALUTE!

Luckily, Fox has picked up Human Target for another season and, beginning October 1st, we’ll get to see this hot guy every week.  What could be more sexy than a man willing to take a bullet for you?

You know you want to hit this – and I’m not talking bullets.

Penned the one-man show, “Walls, Wars and Whiskey” about his experiences growing up in upstate New York and in the military.

Graduated West Point in 1987 with a degree in mathematics.

Some current works you can see him in are the TV Series Crisis on NBC, 5 episodes of CSI (original), and the upcoming movies Another Time and The Lost Boy.  Find him on Twitter and Instagram.

Visit www.mark-valley.com for details on what he’s up to today.

Please click to tweet & help me encourage Mr. Valley to play the lead role of assassin and lovable rogue, Donovan Creed, in a series based on John Locke’s NYT Bestselling series!

Let’s Buddy Up! LisaPietsch on Fitbit

LisaPietsch.com is a participant in the Amazon Services LLC Associates Program, an affiliate advertising program designed to provide a means for sites to earn advertising fees by advertising and linking to amazon.com.